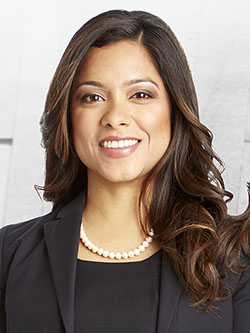 Sharon Robertson is a Partner at Cohen Milstein and a member of the Antitrust practice group.

Ms. Robertson has been repeatedly recognized for her success in leading complex, multi-district antitrust litigation. In 2019, The National Law Journal named her as one of nine “Elite Women of the Plaintiffs Bar,” an award that recognizes female lawyers who “have consistently excelled in high-stakes matters on behalf of plaintiffs over the course of their careers.” In 2018, the American Antitrust Institute honored her with its prestigious “Outstanding Antitrust Litigation Achievement by a Young Lawyer” award for her role in securing one of the largest recoveries on behalf of end-payors in a federal generic suppression case in over a decade.  Similarly, for three consecutive years, The Legal 500 has selected her as a “Next Generation Lawyer” (2017 -2019), an honor bestowed upon only 10 lawyers under 40 years old across the country, who are positioned to become leaders in their respective fields. Likewise, The New York Law Journal recognized her as a Rising Star (2018) – one of only twenty individuals selected to receive this honor. In addition, Benchmark Litigation selected Ms. Robertson for inclusion on its “40 & Under Hot List” (2018) and Law360 named her as one of five “Rising Stars” (2018) in the field of competition law whose “professional accomplishments belie their age,” as did Super Lawyers (2014-2016). Ms. Robertson has also been recognized by Law360 as one of a few female litigators to secure leadership roles in high-profile MDLs, such as In re Lidoderm Antitrust Litigation (March 16, 2017).

Ms. Robertson is spearheading the firm’s efforts in cutting-edge and industry-defining pay-for-delay pharmaceutical antitrust lawsuits, which allege that the defendant brand manufacturer entered into non-competition agreements with generic manufacturers in order to delay entry of lower-priced generic products. Ms. Robertson also heads up the firm’s generic price-fixing cases, which allege that certain generic drug manufacturers conspired to inflate the prices of generic drug products.  These cases come on the heels of a government investigation led by the U.S. Department of Justice alleging similar conduct, which, while ongoing, has already resulted in indictments and guilty pleas.

In addition to leading complex MDLs, Ms. Robertson is an accomplished trial lawyer. She served as a trial team member in two of the largest antitrust cases tried to verdict, including In re Urethanes Antitrust Litigation, where the jury returned a $400 million verdict, which was trebled by the Court, as required by antitrust law, to $1.06 billion, resulting in the largest price-fixing verdict in U.S. history, as well as In re Nexium Antitrust Litigation, the first pharmaceutical antitrust case to go to trial following the Supreme Court’s landmark decision in FTC v. Actavis, 570 U.S. 756 (2013).

Ms. Robertson represents End-Payor Plaintiffs in the following pay-for-delay pharmaceutical antitrust cases in which the firm serves as Co-Lead Counsel:

Ms. Robertson co-chairs the firm’s Professional Development and Mentoring Committee and serves on the firm’s Diversity Committee. She is also an active member of the Executive Committee for the Antitrust Section of the New York State Bar Association.

While attending law school, Ms. Robertson was an intern in the Litigation Bureau of the Office of the New York State Attorney General and the United States Court of Appeals for the Second Circuit.  Additionally, while in law school, Ms. Robertson was selected as an Alexander Fellow and spent a semester serving as a full-time Judicial Intern to the Hon. Shira A. Scheindlin, U.S. District Court for the Southern District of New York.

Prior to attending law school, Ms. Robertson worked on the campaign committee of Councilman John Liu, the first Asian American to be elected to New York City’s City Council.